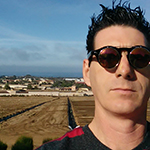 Maynard Breese, who resides and works in Chandler, Arizona, is one of the new breed in digital painters. He creates his works digitally to look like oil paintings, then giclee prints them to canvas. ûHe is a member of the Downtown Chandler Third Friday and the Phoenix and Las Vegas First Friday Artwalks, was co coordinator for the Chandler walk; has been featured in the SanTan Sun News, on Channel 12 Phoenix news, and in the Las Vegas weekly advisor; is now or has been a featured artist at the SanTan Brewery, Cafe De La Cruz, Galerias de los Muertos, the Urban Tea Loft, Evermore Nevermore gallery in Mesa, had solo shows at the Salon7000 gallery space, Shot in the Dark in Tuscon and the Phoenix Theatre, and was part of a multi artist show at Su Vino in Scottsdale and the Broadway Palms in Mesa, AZ. Maynard also has work at the Aruba hotel and casino in Las Vegas, and at the Neon Venus Gallery, also in Las Vegas. He recently won the Zhibit.org Silver medal for their summer contest with his piece, "Finding her Serenity". He also won both "Gallery choice" and People's choice for "Soaring to you", at the Long Beach, CA May 2010 artwalk. In addition to the Long Beach show, he has shown and been invited to show again at the North Park Arts festival and the Ocean Beach arts festival, both in San Diego. û"My goal with my art," said Maynard, " is to create something that not only looks beautiful and invites you to revisit it again and again, but creates an immediate emotional response. Art should be about helping the viewer capture an emotion. Art shouldn't be 'explained', it should be felt.